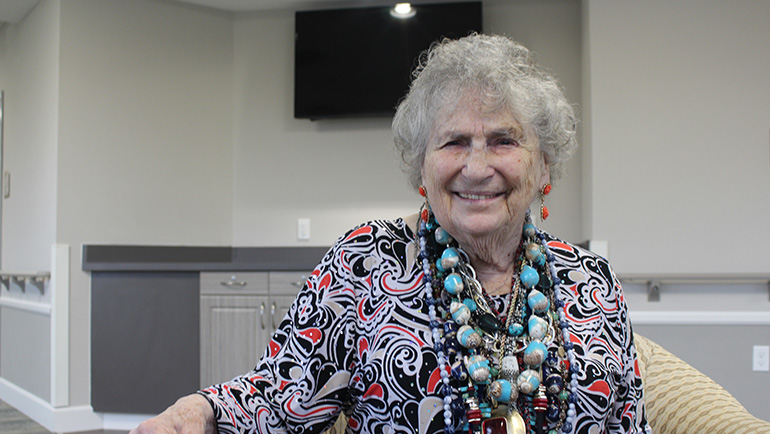 One remarkable act of generosity from a family member made higher education possible for Annette Freedman ’50, M.Ed. ’62, M.S.W. ’69. For more than 25 years, she and her family have given back by providing an educational path for others, with the next generation now joining in the tradition.

Annette grew up in a family of modest means in Toronto, Canada. After she graduated from high school in 1940, she sought to continue her education, but the local colleges were too expensive. That’s when her aunt in Detroit stepped in.

“My Aunt Mimi said, ‘You’re coming to live with me and your Uncle Arthur. You’ll go to Wayne, and I’ll help you,’” Annette recalled. “I’m so grateful to my aunt. Without her, I never would have been able to go to college.”

In a shared bedroom with her two-year-old cousin, Annette worked during the day and pursued her degree at night. The tuition at Wayne was affordable, and she enjoyed learning alongside motivated students who, like her, came from working-class backgrounds.

After graduating in 1950, Annette began her career as a teacher in the Detroit Public Schools, but her relationship with Wayne State was far from over. She returned to the university twice more, earning a master of education in 1962 and a master of social work in 1969. This last degree, which she earned at age 48, launched a 30-year tenure as a school social worker at Detroit and Birmingham Public Schools.

Like his wife, Gerald Freedman began his higher education at Wayne State. He studied at the university for two years before transferring to the dentistry program at the University of Detroit. He served as a medical officer in the U.S. Army during World War II and returned to enjoy a long, successful career as a dentist.

In retirement, Annette and Gerald traveled regularly around the world and committed their energy to learning and volunteerism. In 1992, they started a scholarship for Wayne State social work students that continues to provide support today.

“The letters that I get from people who have received the scholarship are so lovely,” Annette said. “When I read them, I’m just beaming. I was very appreciative to Wayne, and I’m happy to see the scholarship is helping people.”

Annette has supported Wayne State in important ways beyond philanthropy. After retiring, she joined the Board of Visitors for the School of Social Work and has contributed greatly as a volunteer, working to increase support and promote the school’s mission in the community. At age 96 she remains engaged in Wayne State’s progress.

A few years ago, Annette and Gerald discussed the possibility of adding to the scholarship fund as an important priority. After Gerald’s passing in 2016, Annette and her three children decided to honor that intention with an additional investment of $46,500.

This gift nearly doubled the annual scholarship award and created an endowment balance of more than $100,000. The scholarship is one of just a handful at that level in the School of Social Work.

“This is what my parents cared about, and it just made a lot of sense to add to it. They were able to be very successful because of Wayne, and they viewed education as a door to opportunity,” said daughter Donna Winkelman. “I’m so happy that they started this fund, and I’m thrilled that we’re able to add to it to make it even better.”