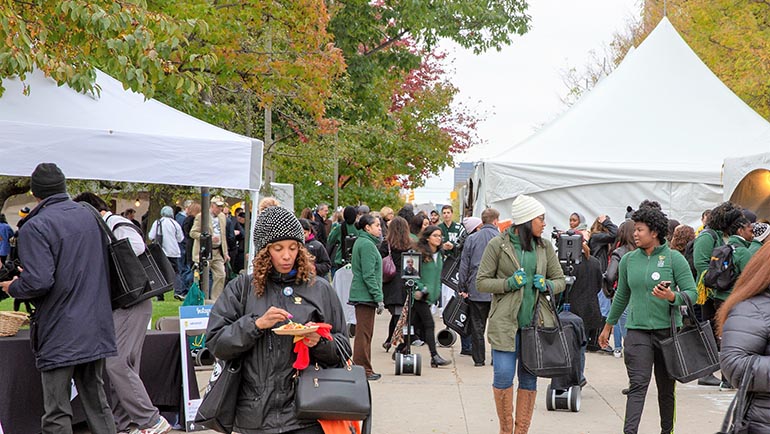 Wayne State University celebrated with alumni, friends and more on October 26, 2018, to mark the university’s sesquicentennial and the conclusion of the successful Pivotal Moments campaign, which raised $776.5 million.

A festival on Gullen Mall began the event with exhibits from schools and colleges, games, food, and performances by Wayne State students. Award-winning actress and Wayne State alumna S. Epatha Merkerson hosted a main stage program that included remarks from President M. Roy Wilson and others, as well as a big reveal of the items included in a sesquicentennial time capsule created for future Warriors.

Significant figures and events from the university’s 150 years were brought to life and introduced to new audiences through the artistry of Wayne State students and staff. As the outdoor festivities were turned over to students for the remainder of the evening, some of the campaign’s most generous supporters were treated to a Pivotal Moments-themed dinner program emceed by Merkerson.

While there were several large, record-setting gifts made to the campaign, the vast majority of contributions were $1,000 or less, with Wayne State alumni, neighbors and friends — including corporations and foundations — contributing at levels unprecedented in the university’s history. Wayne State faculty and staff members also supported the campaign, and students took time to volunteer for events.

The public phase of the Pivotal Moments campaign began in Detroit on October 9, 2014, followed by additional alumni celebrations taking place across the country. During the past year, alumni shared memories and images of their Wayne State memorabilia, as well as items that were placed inside the time capsule.

At the celebration event, President M. Roy Wilson expressed the university’s gratitude for the thousands of pivotal moments made possible through donor generosity and looked toward the future.

“While we close the door on 150 years and the end of a fundraising campaign, we’re at a new beginning,” President Wilson said. “We will ensure Wayne State is recognized as a place of opportunity and upward mobility, a place where students can find their passions and build skills they need to be successful, a place where businesses can find a partner to develop the work force they need, a place where curiosity guides research toward solutions for issues that disproportionately impact urban areas, a place that works toward ensuring that everyone has access to quality health care, and a place committed to supporting art, music and culture in a city that continues to define creativity.”